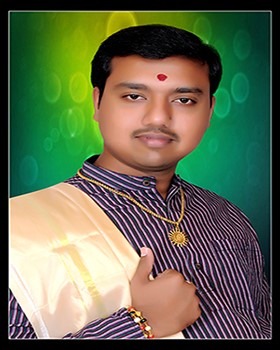 MANJUNATH GURUJI is a renowned 21st century astrologer with modern approach to astrology. He is open to using NASA formulae for astrological calculations at the same time doesn’t fear utilizing best of astrology classics. An experienced Astrologer he teaches astrology and also writes a lot on this subject. Along with this, he is extensively involved in Astrological research assisted with a young team of like- minded astrologers. This explains why people fondly call him “Hi-Tech Astrologer” or “Digital Age Astrologer” – all because of his extensive usage of technology in astrology. Unlike most astrologers he strongly holds a belief that technology can help in improving accuracy of an astrologer tremendously.

The man behind of “Shree Manjunatha Astrology Vastu and Yoga Zone Pvt Ltd”,, this is what CEO Manjunath Guruji says in his own words – “His interest in astrology started around two decades back when he picked up few astrology books from a small bookshop in his hometown. Though later on He realized that his inclination towards Jyotish, Ayurveda and Tantra etc. was very much natural as He is a Lingayatha Basava Tatwa Follower and his forefathers were also followers Basavanna vachanas. He studied various systems of astrology including Parashari, Jaimini, Tajik, Western, Krishnamurthi, Nadi and Lal Kitab, and found all these systems wonderful.”

Today, he is probably the most famous astrologer on Internet with more than 1, 00000 followers on Twitter n Facebook. He mastered various systems of Astrology like Parashari, Lal Kitab, Jaimini, Tajik, KP System, Nadi, Western etc. His astrological consultation is an amalgamation of the different schools of astrological thought and based on rationalized thought.

Manjunath Guruji is known for making several accurate predictions such as Gold touching high, spread of Swine Flu, Death of YSR Reddy, and prediction of cold war like situation in Pakistan etc.

It was in the year 2008, Manjunath Guruji got an amazing opportunity to be a part of TATA Jagriti Yatra, a non-governmental organization that promotes entrepreneurship. In these 18 days of fruitful journey Manjunath Guruji had personal interaction with 36 renowned entrepreneurs/leaders, who were successful in their respective regions. An urge to serve humanity got initiated and he returned with a purpose to work for people.

It’s been almost a decade, Manjunath Guruji has assisted over thousands of families of different profiles from various countries. With a mission to bring Peace, Prosperity and Abundance in their lives, he balances the energies related to body, mind and soul, through Astro-Vastu with vast experience and exposure of correcting energies at clients home, office, bungalow, farm houses, malls, hotels, resorts, factories, etc..

Vastu Acharya Manjunath Guruji, who is an engineer and a MBA Graduate, offers Astro-Vastu solutions to people through his company “Shree Manjunatha Astrology Vastu and Yoga Zone Pvt Ltd”,Bengaluru ,India. Manjunath Guruji has worked with a range of people including Homemakers, Businessmen, CEO’s, Bollywood celebrities and Industrialists. He offers variety of services designed and proven to help businesses and individuals to achieve success. He can be consulted at  mkhastrovastumlm.com and his private office space in Bengaluru city.